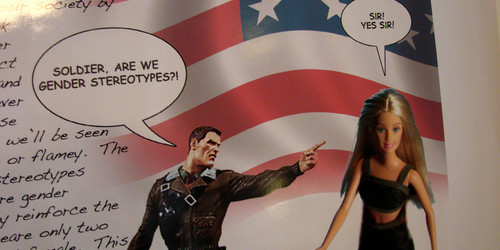 Why is it that authority in one area so often confers authority in another? It’s a well-studied phenomenon. One of the most famous examples of this can be seen in the social psychology experiment conducted by Yale University psychologist Stanley Miligram in the 1960s in which he measured the willingness of study participants to obey an authority when instructed to perform acts that conflicted with their personal conscience. It’s the one involving electric shocks if you want to look it up. I mention it only because of a rather misleading article in The Independent, (‘Sexist toys stop girls choosing to study sciences at school, says top academic’), which put me in mind of it.

The general thrust of the piece was that gender stereotyping started early in life and that parents and educators willingly collaborated in a seemingly deliberate attempt to straitjacket girls into predefined roles that were both sexist and restrictive. This nefarious plan, according to this academic, begins in early childhood. It is here that girls are enticed with a parade of Barbies and other toys (coupled with the deliberate absence of chemistry sets) to abandon any aspirations they might naturally harbour towards the sciences and embrace the prevailing attitude that the subject is only for boys.

The person behind this thinking is Dame Athene Donald, professor of experimental physics at Cambridge University. In her inaugural address as the new president of the British Science Association she elaborated on this conviction at length. Here are a few of her best bits:

‘We need to change the way we think about boys and girls and what’s appropriate for them from a very early age. Does the choice of toys matter? I believe it does. We introduce social constructs by stereotyping what boys and girls receive from the earliest age. Girls’ toys are typically liable to lead to passivity-combing the hair of Barbie, for instance- not building, imagining or being creative with Lego or Meccano.’

“If a girl has never been given the opportunity to take things apart or play with a chemistry set, it must influence them.’

“We need to change the mind-sets of teachers and parents alike. The problem of how we introduce gender stereotyping for our children starts incredibly early. I know there are people who think that what children do at age four is irrelevant to their A-level choices, but I’m not so sure.”

“Evidence suggests that many children make up their minds, certainly about what they don’t want to do, around the time they go to secondary school….Girls as young as seven are saying ‘engineering is not for me’ – but how do they know that at such an early age?” she said.

“If teachers and parents, peers and the media give the message to the teenage girls that physics and engineering are subjects for boys and men, we should not be surprised.”

It is perhaps interesting, given the fact that Dame Athene is a scientist, that she has paid no heed to basic scientific method and offered much in the way of evidence for her claims. Indeed, the article in the Independent has a distinct lack of citable sources. Without the corresponding research I’m afraid that her statements amount to little more than speculation and supposition. One should perhaps also remember that she is a physicist and not a social scientist. To imbue her largely anecdotal offerings with more authority simply because she is a scientist is its own bad science.

This is not to say that there might not be some merit to some of the points she makes. Indeed, the issue of segregation of toys on sale in shops based on gender is an issue that is gaining more consideration these days. Mumsnet.com has been particularly vocal on the matter. Their campaign ‘Let Toys be Toys’ has championed gender neutral marketing of toys, suggesting in one case that Meccano is not just for boys and in another that Halloween, witch costumes are not just for girls or skeleton costumes for boys. The fact that Toys R Us, Amazon and other retailers have responded to such pressure and have already agreed to remove gender-specific signs is an indicative of a shift in societal attitudes. Indeed, Lego has followed suit with the introduction of its first female scientist figure. The ‘Let Toys be Toys’ campaign has now set its sights on the world of children’s literature.

I have a friend who is a proponent of such measures. In her own private crusade against what she sees as entrenched gender prejudices she has chosen to raise her daughter as gender neutral as possible. To this end she has allowed her daughter to make her own decisions regarding the accoutrements of childhood ( colours,toys, play activities and so on), consciously eschewing all instincts to lead her one way or another. What is the result of all this earnest trying? This little girl is now three and a half years old and is completely obsessed with anything pink and glittery! I’m not sure what we can deduce from this ( who knows what everyday influences came to bear on the child. In the the world of tv, nursery, friends and so on , perceived gender markers are pervasive), but it’s interesting for precisely this reason.

I think this type of thinking is to be encouraged but with one important caveat. It should be done in the spirit in which it was originally intended (i.e. to prevent one’s creative life from being stifled and inhibited) and not become itself a form of militancy. One should also be wary of using such commendable initiatives as proof for other developments in the education sector. I think that such a conflation unnecessarily muddies the water. Dame Athene has pointed out, for example, that girls from single sex schools are two and a half times more likely to take A’ level physics than those from mixed schools. She is also keen to point out that about half the schools in the UK do not have a single girl taking physics at A’ level. I think this has little to do with toys in childhood and more to do with ingrained attitudes in these institutions. In a girls school there is a different dynamic. There is more likely to be measures in place to encourage greater science take up…after all the spectacle of having no science department at all would be an embarrassing prospect. Equally, there may well be other socio-economic factors at play. Whatever the case, I would speculate that the girls in both institutions probably played with dolls and other traditional female toys growing up.

One should always be careful about drawing such simple parallels as invariably this tends to mask a more complex problem. Indeed it seems The Independent has a habit of reporting on such things. In a more recent article, for example, they printed research which suggested that women are less likely to become scientists and engineers because they are taught to believe that these professions require innate intellectual brilliance rather than sheer hard work.

The academics behind the research suggest that a misconceived idea of brilliance is holding back girls from taking subjects such as physics, engineering and mathematics in favour of “softer” subjects such as humanities, languages and social sciences. The broad basis for this claim appeared to be the existence of such fictional characters of Sherlock Holmes and Hermione Granger, which they maintained reflected and reinforced such beliefs.

In conclusion I would suggest that there may well be environmental factors at play here, but removing gender labels on toys will not address such concerns. Kids naturally gravitate to objects and things. Their decisions are invariably instinctive not reasoned. They will no doubt be influenced by parental figures (which is another blog in itself) but they do not rationalise their choices with sentiments such as ‘engineering is not for me.’ I think such rationalisations belong with the adult looking backwards rather than children looking forwards.