I would like to start this blog on a slight tangent… Take a look at the picture below. 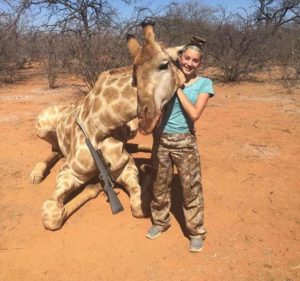 I’m sure many of you are already familiar with this wretched story. To those of you who are not it revolves around a 12-year-old girl and her father, a gun toting, NRA loving, trophy hunting truly awful American man (have you guessed where my personal proclivities lie yet?) who travelled to South Africa for a seven-day jamboree of slaughter. This picture, which was posted by the child on social media, depicts just one of the majestic creatures they paid to shoot for their amusement. It is in many ways an extraordinary decision that this young girl took. It would seem that either she spectacularly failed to foresee the extent and ferocity of the public outcry it would provoke, which itself is really quite telling, or she just didn’t care. Indeed, it is this aspect of the story which is of particular interest to me, for it works to demonstrate a key point about what I intended to talk about today, The Snap Chat Killers.

Before we get on to that however, I’d like to weigh in briefly on this story. The father of this child has subsequently tried to justify these pictures under the various guises of sport, culture, survivalist proclivities, biblical authority, the latent hypocrisy of others, second amendment rights, and perhaps even more repugnant, that the death of this animal was somehow critical in forming lasting memories with his daughter, ‘stories’ that could be passed from generation to generation. One wonders what was so damned great about the senseless slaughter of such a beautiful animal that it requires ghoulishly retelling decades on. In amongst the furore, there was perhaps one sensible attempt at a justification. It was one made by the organisers of the hunt and it spoke of the need for culling. If we put aside the ridiculous idea that each hunt stems from a need to cull the animals in question, I have some sympathy for this notion in principle. Natures method of culling is after all rather brutal. When animal numbers spiral out of control and the environment can no longer sustain them, the end result is inevitably starvation and thirst. However, to get side-lined by such rationales would be to miss the point. These enterprises are not driven by charity (the organisers were keen to point out that the meat produced by these hunts were redistributed to poor communities) but by a desire to kill and a desire to profit from killing. For the organisers of such hunts it is first and foremost a business and a lucrative one at that, propped up by thousands of Americans and other nationalities who pay millions each year to satisfy their blood lust on the plains of Africa.

Of course, as a meat eater one might level the charge of hypocrisy against me, but this would be to conflate two different things entirely. These animal, are not bred for meat. They are engineered for sadism. The intent behind their existence is to find amusement and sport in death, an undertaking which diminishes the person that pursues it. The sight of a 12-year-old girl grinning as she cradles the head of a dead giraffe, one whose life she has extinguished just moments before, perhaps even witnessed its dying gasps, is a starkly unnatural one. I refuse to believe any child is born wanting or desiring this. This is something learned, internalised and then normalised. This is the character forming pressure of environment in all its squalidness. I shudder to even think of my children being exposed to this image let alone participating in its madness. How could I begin to explain the meaning of that photograph? As I sit writing this, I can imagine my daughter’s reaction, her lovely little seven-year old nose scrunched up in confusion and her little head cocked to one side as she tries to make sense of it. And the questions. Why is the girl holding its head, Mummy? Are they friends, Mummy? Is the giraffe sick, Mummy? What is that gun for, Mummy?

And all of this brings me to what I had intended to write about today, the murder of Angela Wrightson. Earlier this year, Angela Wrightson, a severely undernourished and vulnerable 39-year-old alcoholic was cruelly killed by two young teens. This was a woman who, despite her drinking, was perceived by the community as a good soul. She would often sit out on her doorstep of her house, attempting to engage those who passed by in conversation. She could often be heard making impromptu offers for strangers to join her for something to eat or drink or just to chat, such was her loneliness. On the day she collected her benefits she would buy sweets for the neighbourhood children. And it was in this spirit that she had befriended two teenage girls, 13 and 14, agreeing to their request for cider and cigarettes in return for their company. She was kind to these girls and they responded to her kindness by brutally torturing and killing her. For eight hours they came and went, each time beating, punching, stabbing and slashing before eventually leaving her half naked and broken in a pile of her own excrement surrounded by the smashed remains of her home.

The only question was why?

There is no clear indication what caused the violence to start. There was a text sent by the younger of the two prior to the murder referring to her friend as ‘her little partner in crime’ and an earnest declaration that ‘they would be with each other through thick and thin’. In a letter, later sent by the older girl from custody, she remarked how much she missed her younger friend, urging her ‘princess’ to ‘keep her chin up and think of the good times.’ Clearly, there was some ‘magical’ thinking at play here, a distortion of the real world. Their world was one in which a bond formed by sadism was transmuted into a strange and twisted love story.

The background of these girls is predictably awful. The older girl’s childhood was characterised by a revolving door of father figures, all of whom had spent time in prison. Domestic violence featured prominently throughout her younger years. She had been admitted to A&E 24 times, suffering from a variety of broken bones and other injuries, most of which had been inflicted by her mentally ill mother. In between she was deposited in a series of care homes. On the day of the murder she had left the care home she was in to visit her mother. Her efforts were repaid with an injunction to ‘fuck off and kill herself’. This was something she took to heart and in the aftermath of her crime attempted suicide on four separate occasions. She continued to self-harm daily.

The other girl had a similar milestones riddled throughout her young life. It was written on her face and the way she held herself in court. Unlike her counterpart she did not hang her head when admonished by the judge. She looked right through him, detached and unconnected from her crime.

Of course there are those that will cry liberalism at the suggestion of sympathy for these children and I understand that. If the indignity and brutality that Angela Wrightson suffered at their hands were visited on a family member of mine I would be enraged and that rage would be unquestionably justified, but to focus exclusively on this anger is to miss the lessons that these terrible events teach us. These girls were not born desiring these things. They were not thrust into the world from a vacuum. They are a product of circumstance and although they will pay for their crimes there are others who have escaped justice.

There will of course be those who will point to other poor souls who have suffered equally appalling childhoods but who have gone on to lead good and valuable lives. They will cite these cases as evidence that the evil perpetrated by such girls is somehow inherent. I believe this reasoning is flawed. Those that survive the terror of such upbringings are to be commended and celebrated, but their existence does not disprove the causal link between the two. At some point fate has conspired to give these survivors an anchor, however small, to the ‘normal’ world and opened up the possibility that things could be different. It remains, nevertheless, that in all the horrors stories that do play out common threads are invariably found.

The coldness that the younger girl exhibited in court is commonly known as disassociation. This is essentially borne from vulnerability. To connect with the world in the ways we all take for granted is predicated on exposing ourselves to others. For these girls this is something to be avoided at all cost. History has taught them that vulnerability only leads to pain. Opening up to the very people that should have protected them has led to violence, abuse, rejection and emotional terror. Somewhere along the way this fear of vulnerability has undergone a terrible transformation. It has been externalised and projected onto others. The enemy has become vulnerability and in a twisted syllogism those who display vulnerability have become the enemy. Vulnerability in others is perceived as a threat. Like an autoimmune disease their rage turns on the very thing it should protect. They despise weakness because they despise it in themselves and they do the only thing they’ve been taught to do, attack. This process itself becomes the medication for their own insecurities, an addiction to sadism which alleviates their fear of exposure.

I’m reminded so much of the tragic story of Beth Thomas, the very abused little girl who, with a lot of love and care was able to move on from such trauma and heal enough. It is worth a watch.

What then for the future?

These girls can be treated, but it is long and fraught road. It is essential that the secure homes they are sent to have high staffing ratios and quality therapeutic help. But the window for such intervention is a short one. The judge has ordered them to be detained for a minimum of 15 years which entails a transfer to an adult prison when they turn 18. If they have not progressed by then it is unlikely they will do so as the move to adult prison will mean the end of therapeutic services. Add to this the absence of a sense of being looked after and the prognosis is even bleaker. They will be independent prisoners, locked up and left to their own devices for much of the day.

Systemic changes are needed to our social care system and mental health services. Our duty of care extends beyond merely housing these children. We can’t simply take them away from the horrors they have endured because they take it with them. There must be more investment in health care professionals that can work in tandem with the social care system to identify those individuals most in need of help. We must learn from such tragic cases as these and understand the enormous impact of early childhood trauma on personality development and personality disorders. Ruptures, however horrific, I believe can be repaired but only with time, patience, understanding and love.