I came across an old Facebook post on my timeline the other day, one of those viral thingamajigs. It was basically an image of an anonymous letter received by an Australian first time mother, Jade Ruthven (presumably written by ‘friends’ within her face book community), attacking her for her constant baby posts. I include it below if you haven’t seen it. 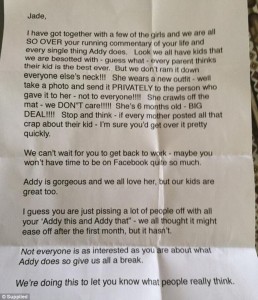 Now, this is clearly cruel, but I made myself step back and tried to think about what was motivating people on both sides of this argument. I am myself perhaps a little over zealous when posting about my children, but then I am also happy to accept it when others do so.

I suppose it is easy enough to see why it might be a source of irritation to others, but then I can also understand how that outpouring of emotion from within almost demands that you share it. Sometimes it feels as if it cannot be contained and it seems inconceivable in that moment that others won’t see it in the same way. Becoming a mother, especially one for the first time is an impossible thing to articulate. It is something that can only be felt. They say that everyone has a doppelganger out there. Well, after my first child was born, I can tell you with absolute certainty that it’s true.